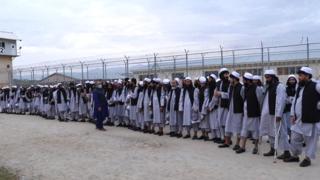 Afghanistan’s President Ashraf Ghani has announced the release of up to 2,000 Taliban prisoners, after the Islamist group proposed a ceasefire.

The announcement came shortly after the Taliban agreed the surprise three-day truce with Mr Ghani’s government for the Muslim festival of Eid al-Fitr.

The president said their release was a “goodwill gesture” designed “to ensure the success of the peace process”.

“President Ghani today initiated a process to release up to 2,000 Taliban prisoners… in response to the Taliban’s announcement of a ceasefire,” a presidential spokesman wrote on Twitter.

The issue of Taliban prisoners has proved a contentious one during the peace talks between Mr Ghani’s government and the hardline Islamist group.

Last month, historic face-to-face talks broke down over a prisoner swap – part of a US-Taliban deal signed in February without the involvement of the government.

Arguments over the swap – involving thousands of Taliban fighters and 1,000 pro-government forces – delayed the start of further peace talks.

But the latest announcement is likely to raise hopes among Afghans and international observers of a longer-term reduction in violence as well as possible progress in any future talks.