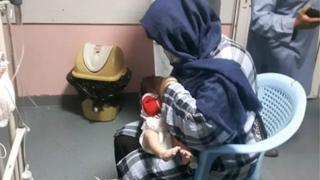 The woman nursing the babies of murdered mothers

Firooza Omar was at home when she heard about last week’s deadly attack.

Militants had stormed the maternity ward of the Dasht-e-Barchi hospital in the Afghan capital Kabul, killing at least 24 people, including newborns, mothers and nurses.

“I was breastfeeding my own child and I got emotional. I could see the suffering of these other babies,” the 27-year-old psychiatrist says.

As the mother of a four-month-old boy, she decided to help in a way she was uniquely placed to, and volunteered to nurse babies whose mothers had been killed or injured.

With the support of her husband, who agreed to look after their child while she was away, Firooza travelled to the nearby Ataturk Children’s Hospital, where around 100 rescued women and children had been taken.

Although the hospital is 2km (a mile-and-a-quarter) from her home, the journey remained risky in a city left traumatised and fearful by the brutal attack.